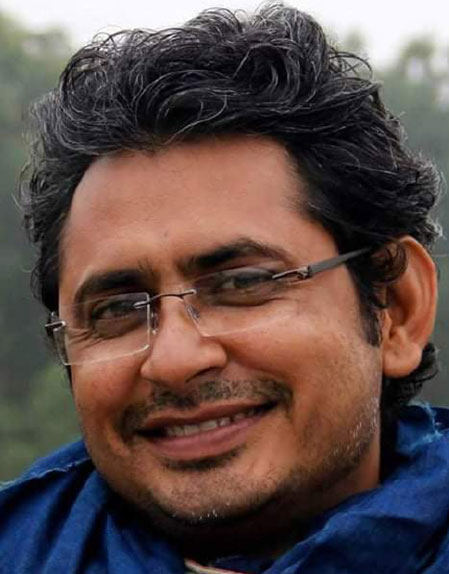 The catchily abbreviated syntax of design — a discipline that he became proficient in while he was in training abroad — gives the works of Vishal Bhand their distinctive thrust. On the other hand, an East Asian legacy, reflected in calligraphy and delicate landscapes, must have influenced him in his student days at Shantiniketan’s Kala Bhavan. Its romanticism, melding awed observation of Nature with a poetic intimacy, leavens his bare, hefty strokes to pronounce a most welcome alliance of unlikely components that complement each other.

Tracking his language of recent years indicates that the nervous, impromptu chatter that had marked his earlier works has lately ripened into reticence. No longer do networks of limp acrylic lines meander to knit loose, fragile, disintegrating grids that trap tangled skeins at places.

Nor do agitated lines charge with a haywire frenzy across muscular structures. In fact, he doesn’t even use acrylic any more, preferring ink and natural pigments derived from barks of trees and from leaves, while the canvas has been replaced with silk sheets that are almost white, but not quite. This change in the medium might, just might, be a Shantiniketan syndrome.

But, even as he’s been paring down his expression, his brushwork remains spontaneous emphatically ensuring that the cogent minimalism so intrinsic to design grammar doesn’t turn into a predetermined rigidity. Indeed, the broad, sweeping strokes trailing hiccups of straggly bristles, bleeding penumbrae at the verges, or scattering accidental drops of ink, speak of a muted volatility. It is these ‘imperfections’, the unplanned side-effects, so to say, that breathe sentience into inert bands, and take them away from the exact replication of mechanical reproduction. It’s as though the ink and the brush have minds of their own and resist being wholly subservient to the will of the artist.

Bhand insists that it’s form he seeks to express and not calligraphic elements. There is, no doubt, that the hint of the familiar lies in his strokes which the viewer may decipher in terms of known images and the fundamental essence of their shapes. Vertical and horizontal bands, circles and arcs, along with biomorphic curves and thick dashes encourage symbolic interpretations: a tree trunk here, a river there, unknown creatures elsewhere. A pair of strokes, one vertical and one curvaceously feminine, could even be seen as a gender reference. But this search for a literal representation in shapes strips them of the unscripted tease of ambiguity.

Like Malevich’s square and circle or Mondrian’s rectangles, that conveys inchoate sensations rather than explicated meanings, Bhand’s works appeal primarily to the viewer’s aesthetic sensibility. The kind that would heighten the fluent grace of calligraphy, one that radiates an autonomous beauty beyond fixed linguistic meanings.

At times, the artist couples his strokes with delicate leaves that are printed on the surface of the silk, importing a clearly East Asian resonance. Elsewhere, blurred stains of little leaves offset heavy, black, Klinesque characters that seek to claim centrestage. But the set that induces a range of tones, textures and intriguing, elusive clues comes from dipping large, creased silk sheets in natural pigment. What emerge unbidden from this chemistry are tactile topographies of varied nuances. 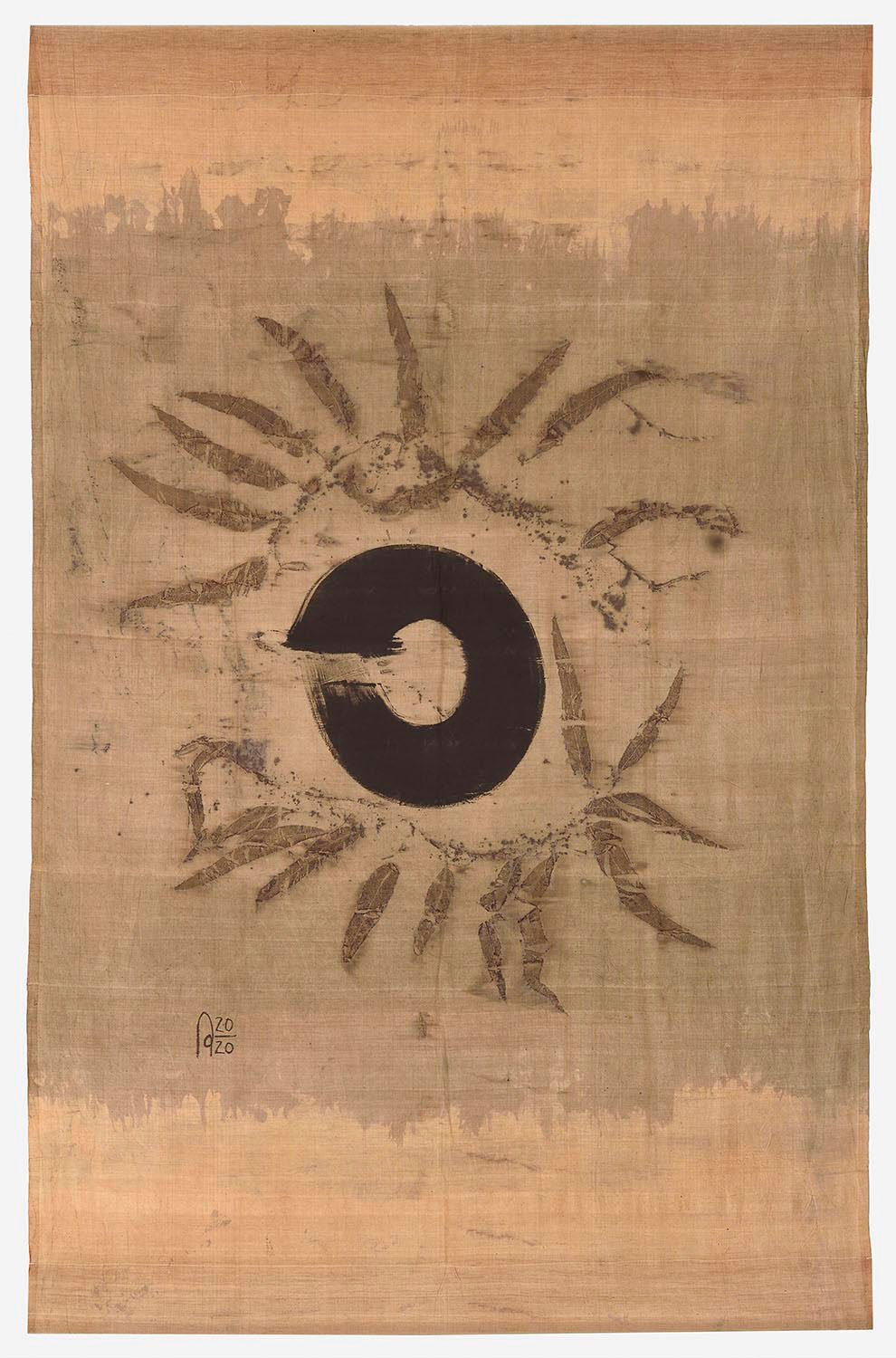 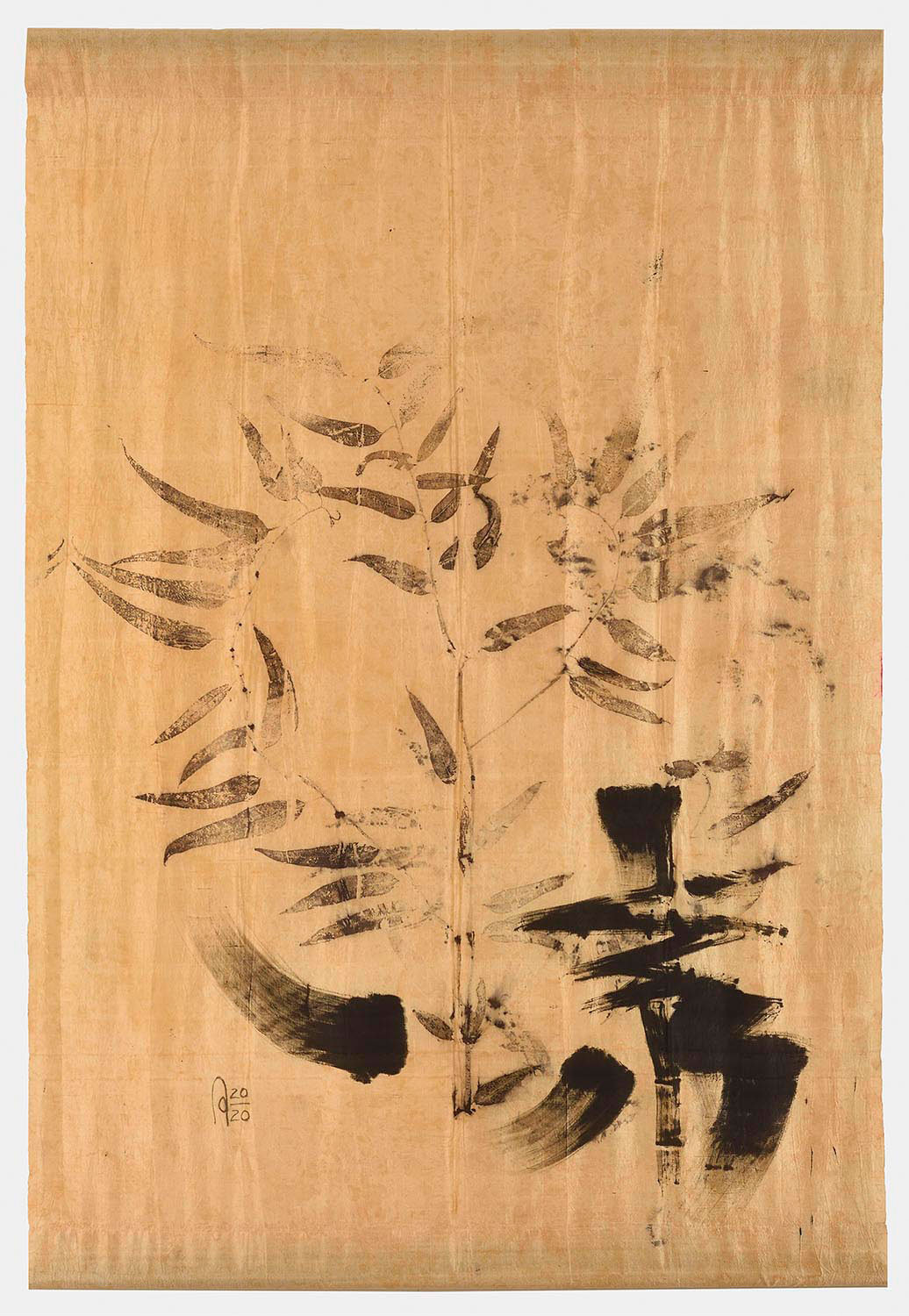 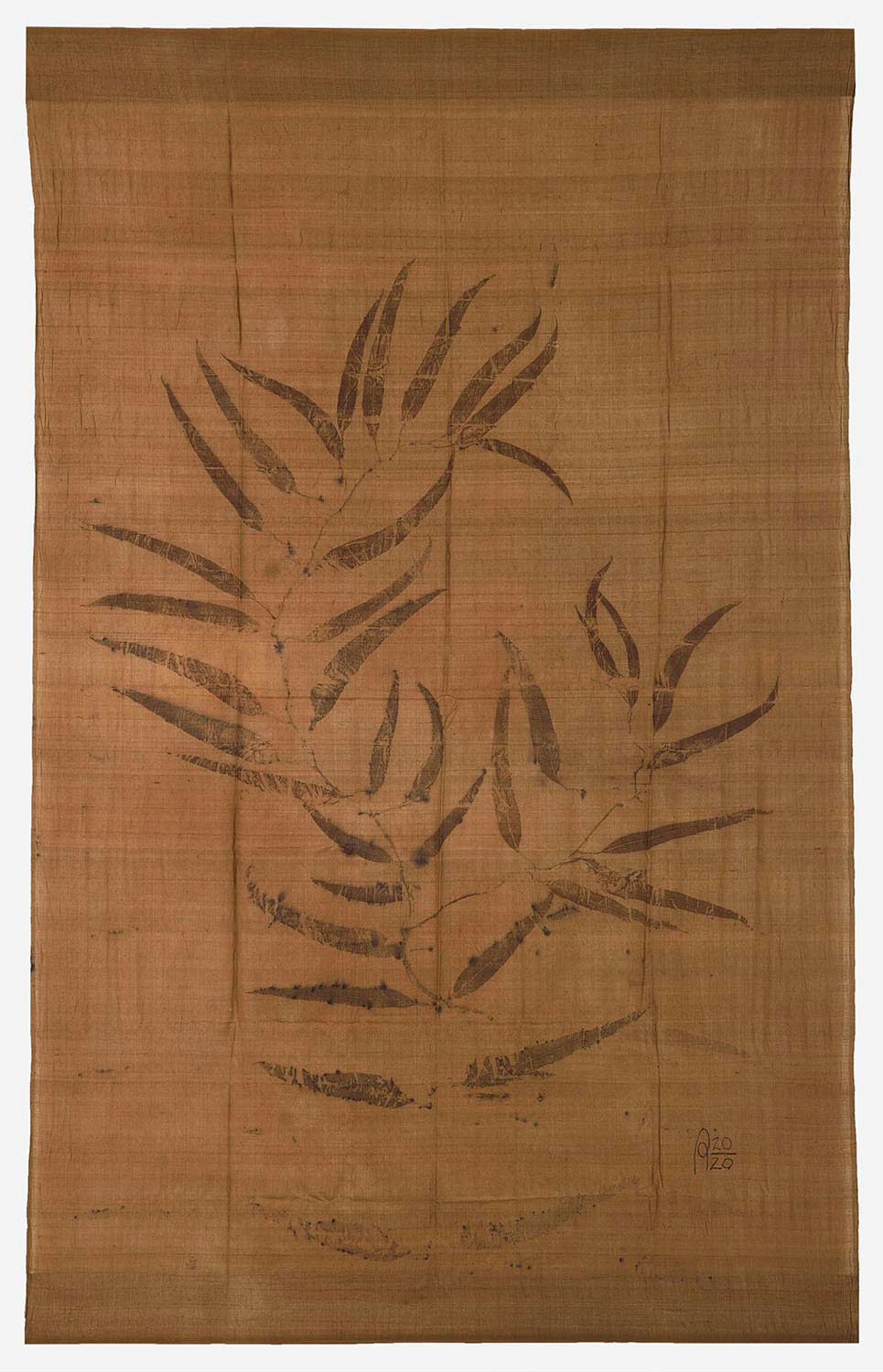 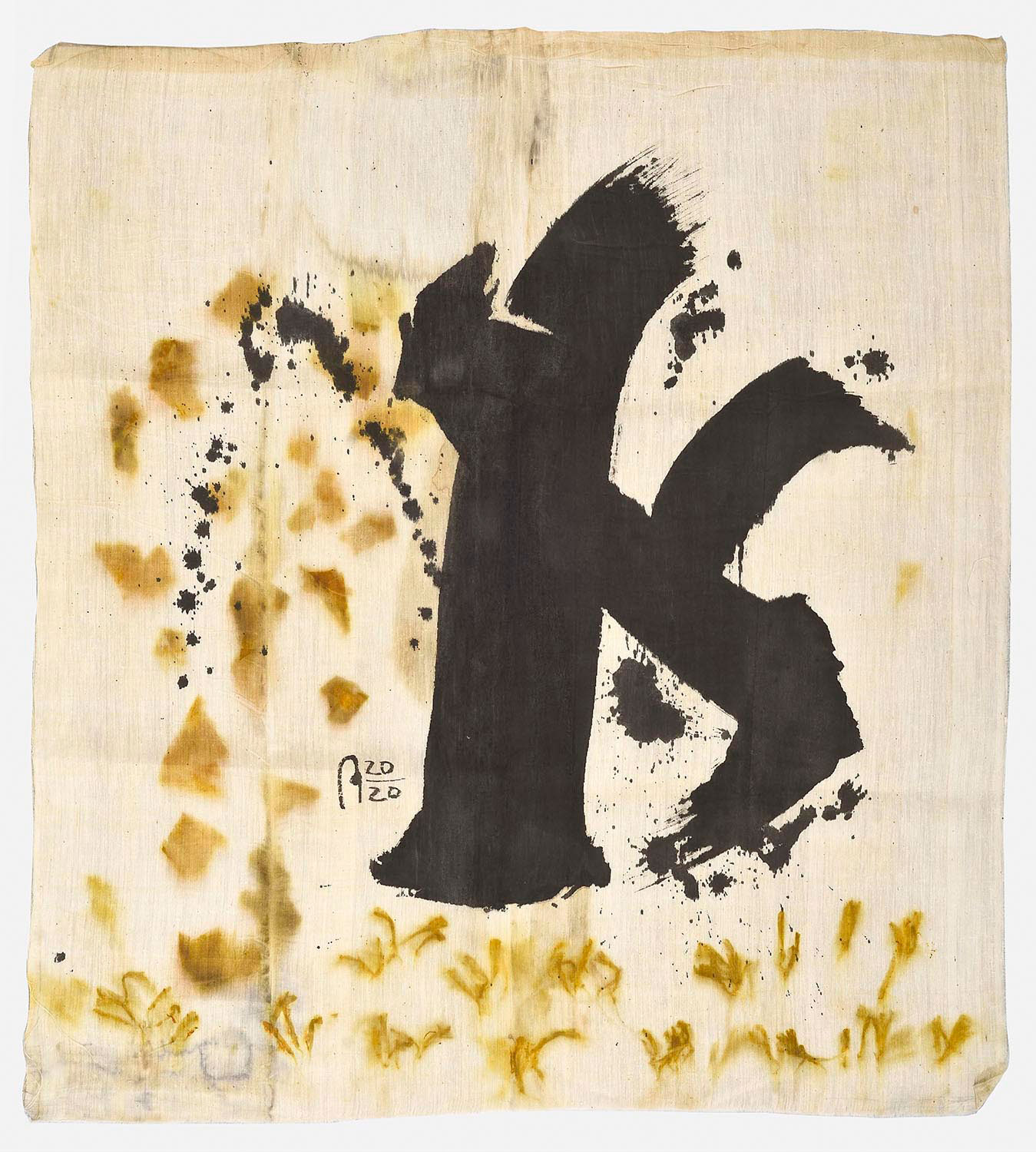 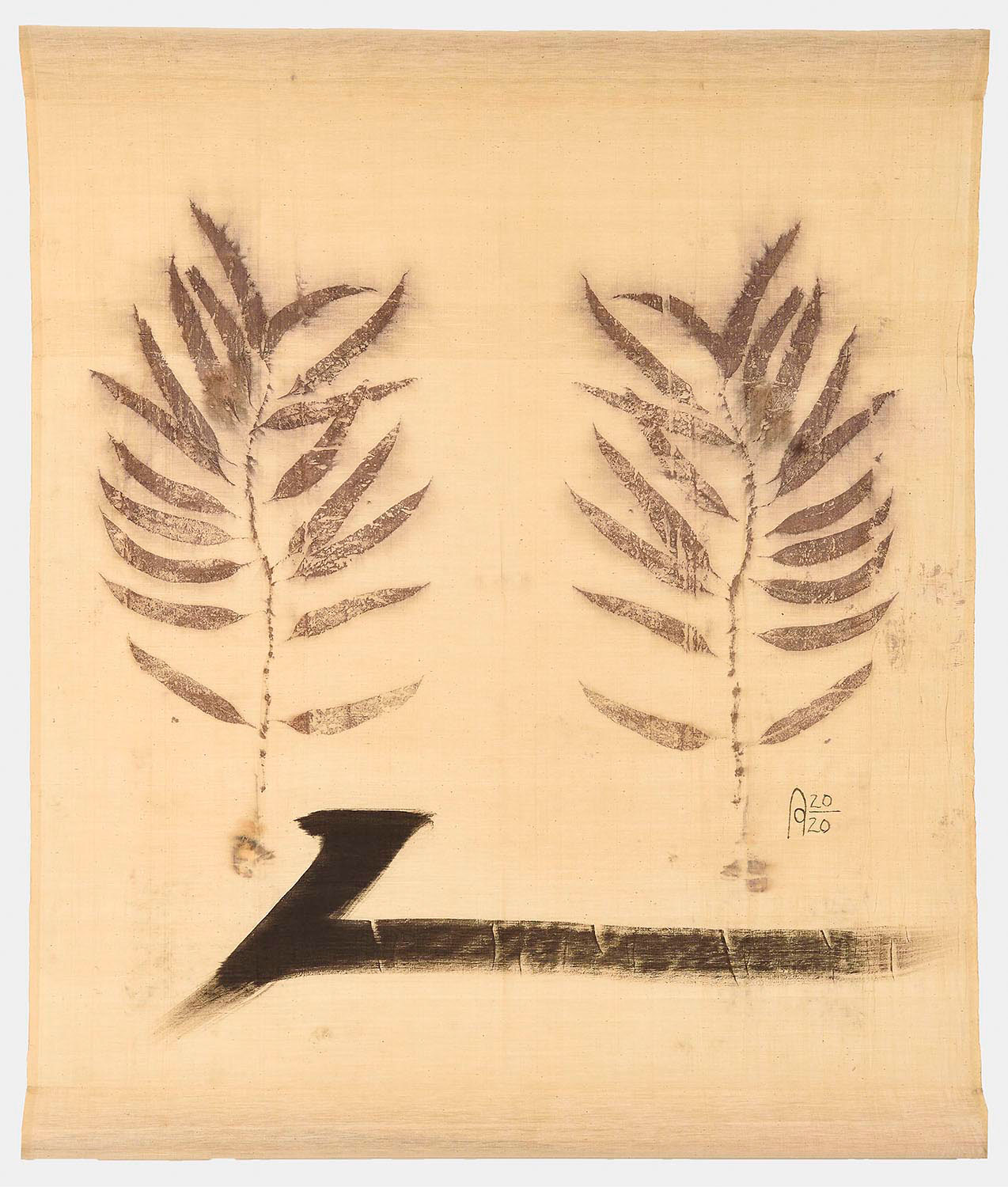 Title: Me and Myself

2012: Expressions: An exhibition of paintings, Society of Indians, Altona

2010: Echoes: An exhibition of paintings, organized by Indian community of Seabrook, Victoria

2009: Black & White: An exhibition of paintings, Society of Indians, Altona

2007: Color Form and Texture: An exhibition of paintings, Weavers Centre for Arts, Kolkata

Tradition and Modernity: An exhibition of Paintings at India Art Gallery Pune

Beyond Figuration: An exhibition of Paintings at Gallery K2, Kolkata

Art of Santiniketan: An exhibition of paintings at Royal College of Art, London

2007:
Indigo: An exhibition of paintings at Delhi organized by Weavers Centre for Arts, Kolkata

Indigo: An exhibition of paintings at Weavers Centre for Arts, Kolkata

1998: INLAKS Foundation Scholarship, to read M.S. in Textiles at University of Leeds, U.K.